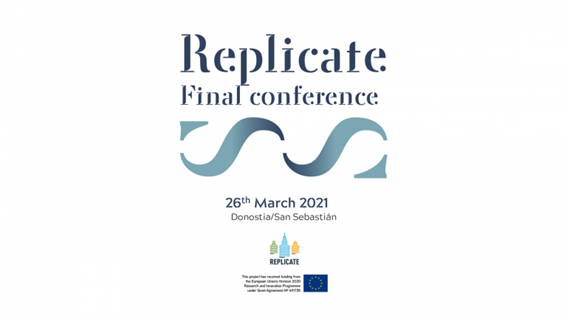 The final conference was a great opportunity to present the achievements of the project that started in February 2016 and has ended in January 2021. Around 100 people from several European countries joined the event and had the chance to learn more about the results and impacts of REPLICATE project during these 5 years.

Ana Aizpuru, Smart Strategy and Sector Specialisation Manager of Fomento San Sebastian, spoke about the Lighthouse City of San Sebastian as smart city and shared the vision of the city and thanked the collaboration of the different stakeholders involved in the project. Stefan Junestrand, Phd in Arquitecture, international expert and speaker in the areas of Smart cities, intelligent buildings, sustainability and blockchain, spoke about challenges and opportunities of Smart Cities, and presented some of the key aspects of the smart cities and their relation with sustainable development goals.

After the institutional an external experts’ presentations, the conference was divided in 4 thematic blocks.  ‘Block I – Successful city models for transformation of districts’ was focused on the REPLICATE Project results and impacts generated in the three lighthouse cities.

The results and impacts of the city of San Sebastian were presented by Nora Mendoza, from Fomento San Sebastian. Alessandra Barbieri spoke after her to present the case of Florence as a member of the Florence City Council. Finally, Sarah Lee from Bristol City Council presented the results of Bristol’s case.

You can check the final results of replicate through this link.

You can check the presentations through this link.

After a short break, Eduardo Miera, from Tecnalia worked as moderator during the second block of the event: ‘Block II – Keys for scale up and replication of smart solutions. Francesc Pardo, from the ESADE Business School, and Mike Yearworth, from the University of Exeter, talked about business models and funding. Followed by them, Chiara Tavella, from SPES Consulting, discussed the topic of scale up and replication in the cities. 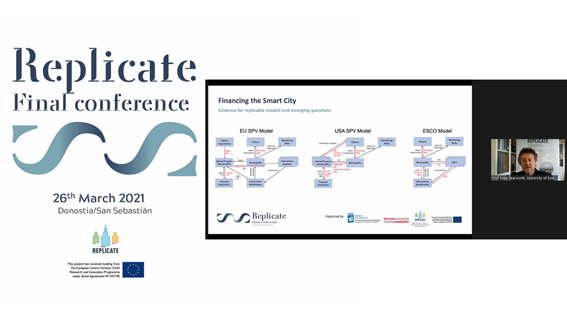 Igor Calzada, from the University of Oxford, leader of the replication activities for the fellow cities in the project framework, presented and moderated the ‘Block III – City to City Learning’. Representatives from the Fellow Cities took part in this block: Kai Lipsius, from the Essen City Council; Georges Ohana, from the Lausanne City Council; and Baha Kuban, from Demir Enerji from the city of Nilüfer. The fellow cities have been involved and working in collaboration with the lighthouse cities since the beginning of the project.

Before ending the act, with Jens Batholmes as moderator, the ‘Block IV – Lighthouse projects best practices’ took place. In this last section, topics such as lessons learned, recommendations and the future of Smart Cities were discussed. The participants and sister projects in this section were the following: REPLICATE – Elisabeth Jorge from Fomento San Sebastian, Sharing Cities – Nathan Pierce from London City Council, SmartEnCity – Francisco Rodríguez from Tecnalia, Smarter Together – Phillipe Fournard and Maxime Valentin from the Lyon City Council, MySMARTLife – José Luis Hernández from Cartif and Ruggedised – Albert Engels from Rotterdam City Council.

Fomento San Sebastian as project coordinator closed the event and thanked the participation of the participants and guests.

REPLICATE project has been working at developing and validating a sustainable city business model in the pilot cities of San Sebastian (Spain), Florence (Italy) and Bristol (United Kingdom) to improve the transition process towards a smart city in the areas of energy efficiency, sustainable mobility and ICTs/Infrastructures, by accelerating the deployment of innovative technologies, improving the quality of life of citizens, and influencing the replication process. The project has also contributed to increase the quality of life of citizens across Europe by demonstrating the impact of innovative technologies used to co-create smart city services for citizens and to test the optimal process for replicating successes in cities and across cities.

The REPLICATE project coordinated by Fomento de San Sebastian, is funded by the Horizon 2020 program of the European Commission contract number 691.735 in the SCC1 Smart Cities and Communities call.