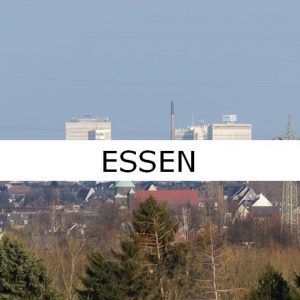 City description
The city of Essen is located in North-Rhine Westphalia, in the heart of the Ruhr Area. It is an independent city in the administrative district of Düsseldorf. With around 589,624 inhabitants the city of Essen is the ninth-largest city in Germany. Essen is the centre of the Ruhr metropolitan area which encompasses approximately 5.3 million people. Following London and Paris, this metropolitan area constitutes the third-largest agglomeration in Europe.

Coal, steel and heavy industry all featured prominently in Essen’s past. But now the reinvented Ruhr region hub is showing off its environmental credentials as 2017’s European Green Capital. The successful 150-year transformation story, from a city of coal and steel to the greenest city in North Rhine-Westphalia and a services and financial centre, is a role model of structural change for many cities in Europe. 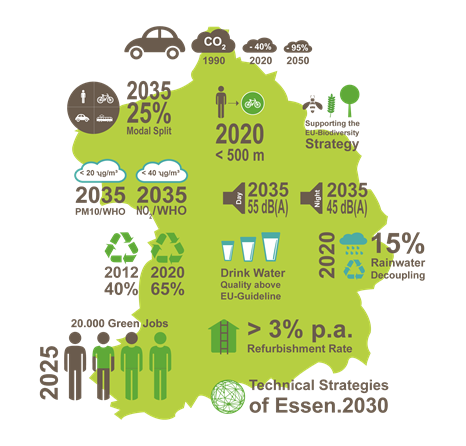 Essen’s vision of the future is one of a prosperous, economically sustainable major city, which is resistant to climate change, and which offers its population opportunities to develop in a healthy environment. Essen promotes green infrastructure with high water quality and parks with high recreational value, innovative and environmentally friendly businesses (Green Economy), integrative education and sustainable mobility concepts.

Achieving the title “European Green Capital 2017” made a major contribution towards these goals. The city of Essen has a pioneering role for eco-friendly urban life and at the same time an exemplary function for other cities. Once again, the city of Essen by receiving this award can prove its potential in areas like climate protection and preservation.

For many years, Essen has been involved in various networks and initiatives to improve the climate regionally and municipally and to achieve sustained climate mitigatiom. Since 1993, the Essen is a partner in “Climate Alliance / Alianza del Clima e.V.” In 2009, the municipal council decided on an “Integrated Energy and Climate Concept”. In 2010, the city of Essen joined the “Covenant of Mayors” and was awarded the “European Energy Award” for the first time followed by awards in 2013 and 2016.